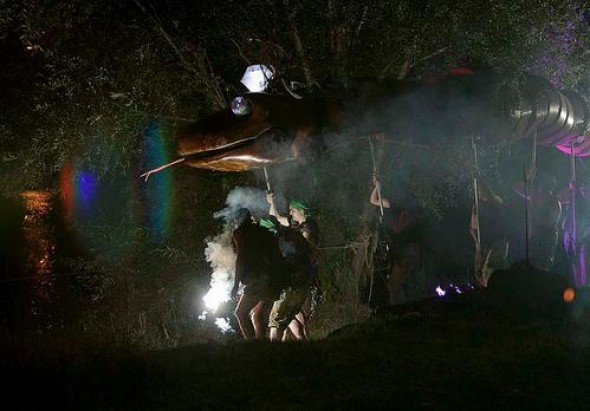 Comes the Serpent 2014, one of the main themes of the Annual Fiesta of Manlleu

Every August 14, with the celebration of the Annual Fiesta of Manlleu comes one of the most awaited traditions and participated by the town and the rest of the Osona region: the Serpent 2014. The event includes samples of different popular culture such as music, drums and pyrotechnics.

Once it gets dark, from a boat located in the river Ter, the legend of the celebration is explained: some children crossed the Devesa to get a diamond that had been guarded by the Serpent under a mortar. And this is how the wrath of the beast awakens, represented by fire and pyrotechnics and a parade begins from the Devesa, towards the neighbourhood of Dalt Vila and it ends in the square Fra Bernadí; the parade symbolises the persecution of the beast looking for the diamond that has been stolen. The legend, which has his own song and dance, is the plot of this celebration that culminates with the “Diamond Waterfall” and which represents the competition of the two children to win the merit of having stolen the diamond.

However, the Serpent 2014 is not only a night celebration. Everything begins to half past ten in the morning, in the Embarcador (the pier) with a walk through the Devesa and where there is a reading of the legend. At 5pm it begins the children activities of this celebration with workshops and a puppet show. From 10pm arrives the highlight, with the appearance of the Serpent and the beginning of the central show. A mix of popular culture, magic and theatre designed for everyone.