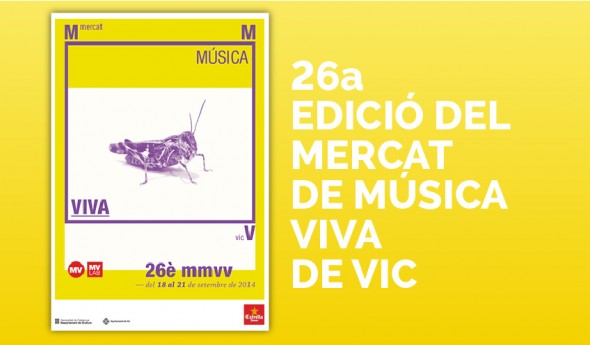 From September 18 to 21 Vic becomes, once again, in the music Catalan display window

The third week of September, Vic will fill the streets with music with about 60 musical groups recognized nationally and internationally; of these, about twenty will present their new work in the Mercat de Música Viva de Vic which this year reaches its 26th edition.

Among the proposals scheduled, it can be highlighted the new work of Kepa Junquera, Adrià Puntí, Raimundo Amador and Marlango. Names like Roger Mas, Marc Parrot, Brighton 64, Els Pets, Fundación Tony Manero, Bongo Botrako, Plu, Anna Roig i L'Ombra Ton Chien and The Mamzelles, among others, complete the program. The Mercat de Música Viva de Vic, a benchmark in the music industry sector, once again has the aim to bring the international and national music to the public in general and be a real meeting point for professionals in the music industry as well as contribute to the dynamization of the music industry.

Beyond the artistic programme, this year has several new features, such as incorporating the iconic Roman Temple of Vic as a new concert space. Also, for the first time, a market will host an exhibition of musical instruments: "Fira Music" which, located in the Sucre exhibition ground of Vic, want to gather traders of musical instruments and accessories, luthiers, dealers, music schools, manufacturers, computer music business and sound and event rehearsals, among others.