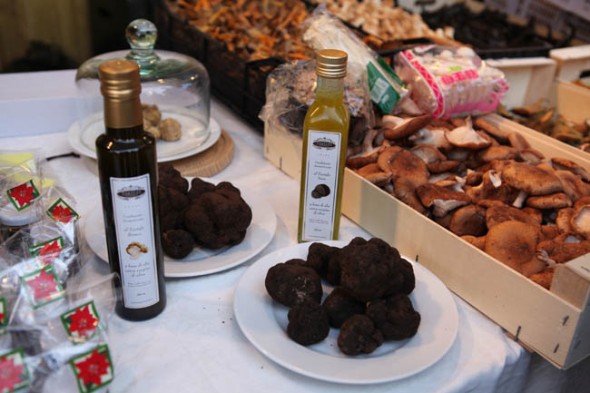 The weekend of 15 and 16 December, just before Christmas, carried out the fifth edition of the Truffle. A fair five years ago is performed. Visitors can find truffles, preserved or incorporated in the kitchen, the meats, cheeses, and other options even more original: chocolate truffles, truffled eggs, liqueur truffles, truffle jam, etc.. It is an opportunity to purchase and taste the black diamond of Catalan and international cuisine. The Gourmets can also take part in cooking workshops, tuition and Christmas recipes to make truffles. They may taste the dishes for food establishments in the municipality.

In the late nineteenth century, it marked the sparkle market price of truffles in the entire state. The market started with Juan Soler neighbor sparkle, which was the first modern truffle trader known in Catalonia around 1820. Their activity centered initially on a house in the Plaza Mayor, opened the door to a business organized in the late nineteenth century was about the entire state.

Today, truffles again a feature of the town of sparkle. Local retailers can always find truffles, preserved or incorporated in the kitchen, the sausages, etc.. and around Christmas is the unique Truffle Fair sparkle. Since 2008, during truffle season (November to March) sees the sparkle Truffle Fair, an outdoor market that specializes in what is considered the "black diamond" of Catalan and international cuisine.

Truffle Fair has a privileged setting in the old sparkle: Also, the show includes seminars and discussion, tasting of traditional products and all the activities of Christmas.